The most common causes of car bodywork damage

Car bodywork damage can be as small as a few scuffs and scrapes, or as detrimental as dents – either way, they are things that almost everybody experiences during their driving lifetime. You could try and prevent these causes of car bodywork damage by investing in a car cover for when your car is parked, or even a device like a black box to ensure that you are driving carefully and safely. Despite this, even some of the most careful drivers still experience car bodywork damage due to rocks or road splinters – sometimes, it is unavoidable. In this case, you should always have a great bodywork repair shop in mind just in case any damage should occur.

These are the most common types of damage to your car’s bodywork – often they will be so small that they are unnoticeable, and you will carry on using your car without realizing that they are there. Even if they are noticed, many people tend to ignore little scratches in the paintwork as they are largely superficial and the majority of vehicle owners have them. These little scrapes and scratches are usually caused by airborne stones or debris from the road, and are largely not the fault of the driver – it is inevitable that some roads will have loose material that can scuff the paintwork of your car, so it is important to check your paintwork regularly for any more serious markings.

Often dents are considered more serious than smaller scuffs because they are much more noticeable – even so, some still choose to continue using their car with dents to avoid costs. It is recommended that you repair dents as soon as possible, however, due to the fact that excessive driving can make the appearance of the dent even worse. These can be caused by a number of things – collisions or grazes during parking to name a couple. There are different kinds of dents, both of which can be repaired – a smooth dent, which is caused by gentle spread pressure on the bodywork of your car, and a creased dents caused by concentrated pressure, usually with a sharp object. Regardless of whether the dent is removed or a full panel replacement is carried out, all dents can be repaired in one way or another, so don’t be afraid to ask for help. 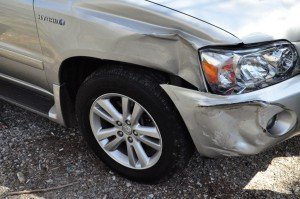 A less known problem with car bodywork is water residue. Water droplets, when left for a long period of time, can affect the paintwork of your car, stain chrome and even ruin reclining hoods on convertibles. A good way to prevent this is to invest in a car cover to protect your vehicle from the weather. Water marks are not at all costly to remove should you decide to repair them – a quick and simple paint job is all that is needed to correct stubborn stains.